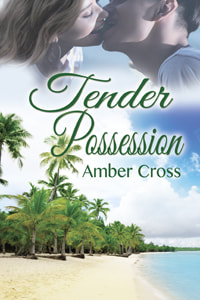 Tender Possession - Love in the Kingdom Book #2
Released April 29, 2019
The only way to conquer her heart is through tender a tender possession...
Emmeline Charbonneau spent most of her life protecting others from her father's violent mood swings and erratic behavior. Now that he's gone she isn't so much relieved as cast adrift. She desperately needs an anchor.
Romney Wilson is his mother's second son and his father's second child. Success may take him all over the world, but he is still that youngest sibling trying to find his place in it. Quite simply, he needs to be needed.
The connection between them is immediate and strong. But can she trust this impulsive and spontaneous charmer to stick around? And will he get past her wall of self-preservation only to scare her away?
Excerpt from Tender Possession:
"You’ll be coming to Andros, then?”
Unsnapping her coat, she brushed by him and hung it up, buying time. “I think we need to get some things straight first. Some boundaries.”
“Oh?”
She stepped back a few feet to look directly at him.“I don’t want to sleep with you.”
“Yes, you do.”
His arrogance momentarily left her at a loss for words. Recovering quickly, she said, “I mean I’m not going to sleep with you.”
“Is there something wrong with me?” He cocked his head to the side and ran his gaze down the length of his body, then up again. “Something I should know about?”
Nonplussed, she said, “No, there’s nothing wrong with you.”
​His smile was blinding. Deep grooves formed on either side of his mouth, and his dark eyes lit with humor. She had to admit she fell right into that one even before he said, “Then you do want to sleep with me.” 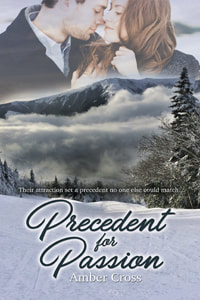 Precedent for Passion - Love in the Kingdom Book #1
Released October 15, 2018
Their attraction set a precedent no one else could match…
Abby’s imagination hadn’t been playing tricks with her memory. Fifteen years after meeting him in a court room, Glen Plankey is still so attractive he makes her toes curl. And that voice! Deep and authoritative, she practically melts into a puddle at the sound of it. She can’t wait to see more of him.
He can’t get away fast enough. Everything about her reminds him of that terrible day, yet his brain turns to adolescent mush when he looks at her curvy body and his heart skips a beat each time she smiles.
Soon undeniable attraction leads to scorching passion and grows into a true love affair. But is it strong enough to survive when he thinks she has played him for a fool?​
Excerpt from Precedent for Passion:
“I’m going to kiss you, Abby.”
“Uh-huh.”
He loved the way she didn’t hesitate with her response, though her face flushed, and the pulse at the side of her neck started racing.
It was a hard, dry kiss. Not satisfying by a long shot, but he didn’t want to presume any more than he already had. He could still remember the shock in her eyes fifteen years ago when his ex-wife made him sound like an animal. He didn’t want to scare her away.
So his heart skipped a beat when she whispered, “More. Please.”
Nothing turned him on quite like a woman who knew what she wanted and wasn’t afraid to ask for it. Except maybe this woman. Everything about her excited him. Grasping her shoulders and pulling her close, he slid his tongue along the seam of her lips until they opened, then delved into the warm recesses of her mouth.
She held nothing back. Meeting him with equal passion, she poured herself into the kiss, and when she slid her fingers beneath the brim of his hat, scraping the sides of his skull with her nails, a sizzle raced up his spine. He was a teenage boy again. On fire with lust for her like it was the first time he ever held a woman, he was ready to put the car seats back and fog up the windows. 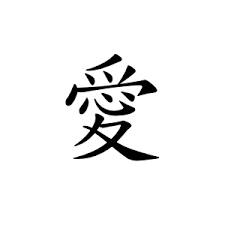 Open Door to Love-Love in the Kingdom Book #3
J Moulton believes she was born beautiful but defective. Like the Barbie dolls she got each year for her birthday, she has blond hair and blue eyes and the height to carry fashionable clothes but just as the proportion on those dolls was off, something was always off with her. She hugged too hard, sang too loud, and ran too fast. She said things at the wrong time or in completely inappropriate settings. Her whole life has been a pattern of embarrassing behavior followed by running away and trying to re-invent herself only to do something unforgivable and start all over again.
David Wang is neither small town born nor small town bred but since buying The Gables he has become an integral part of Somerset’s business and civic life. He even joins the chamber of commerce, helping to craft a long range strategic plan for increasing tourism. To kick off the advertising campaign that goes with it, the board of selectmen and the chamber of commerce host a wine tasting at his resort.
The last person he expects to see there is J Moulton, or Jonnie, as he knew her when she propositioned him three years earlier.
J had been so happy to get this job, but when she spots the Chinese businessman she panics. Where can she hide?
It turns out she doesn’t have to. David has never met a more exciting woman. She wears her heart on her sleeve and he thinks it’s wonderful. So he offers her a job and a chance to stop running. But will her biggest secret, an outrageous adolescent episode still too embarrassing to speak of, be even too much for him to accept?
Family Tree:
Abby - the oldest
Daughter to an Irish American activist and a Bahamian artist of black and white parents. Abby is a brilliant lawyer and judge, devoted to her career but always there for her younger brothers.
David-the stepbrother
Losing his Chinese father before he was born, he is the only child to a Chinese American fashion designer until she falls in love with a Bahamian artist. David becomes the middle child, a successful businessman and dutiful son who can be counted on to take care of everyone.
Romney-the half brother
Born to a Chinese American mother and Bahamian father, Romney inherits the best of both cultures. He is quick witted, spontaneous, charming, and highly intelligent. As a master programmer, he is highly sought after by clients  around the  globe, and he is always on the move.
Copyright 2018 Amber Cross